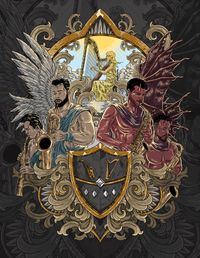 The saxophone has long been vilified as the bad boy of the musical instrument world, banned by both popes and fascist dictators alike as a symbol of debauchery and hedonism. On the opposite end of the spectrum we have the wholly angelic harp, the instrument of Gabriel, Cupid and all things good. Put them together and the sparks fly producing a new and largely uncharted soundworld. The Nexas Saxophone Quartet is collaborating with renowned harpist Emily Granger to embark upon “Angels and Demons.”

“The mellifluous, sonorous voices of the saxophones contrasted the twinkling agile magical sound of the harp, so superbly played by Ms. Granger.” Sydney Arts Guide.